PC Gamer is supported by its audience. When you buy through links on our site, we may earn an affiliate commission.

Written on March 2, 2022 in DEPARTMENTAL by MalikShoaib 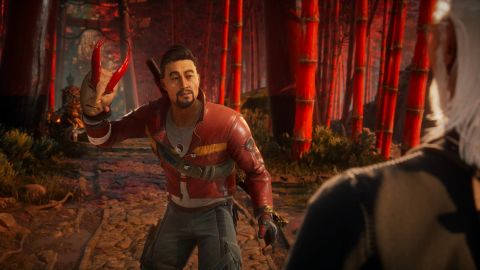 Shadow Warrior 3 is a fast-paced FPS for adult-aged children. It’s designed for those who’d enjoy playing as East Asian caricature and human dick joke Lo Wang, whose main character trait is that he sucks. He’s a tide of crap one-liners and innuendos so relentless that they regularly cut each other off during a firefight. He’s the kind of man who’s rating how bangable the game’s only female character is within moments of meeting her. He’s the answer to a question nobody asked: what if Deadpool was racially insensitive, and you had to be him for seven-to-ten hours?

It begins with Lo Wang in a depression, because he accidentally destroyed global civilization by releasing a banished hell-dragon and its legions of demonic yokai. It ends with me in a depression, because I had to play it. In between, there’s a lot of shooting and an inescapable feeling that the legacy of the original 1997 game would be better left forgotten.

I’d like plenty about Shadow Warrior 3’s throwback shooter rhythm if it was anywhere else. Its singleplayer-only campaign of combat arenas excels at one thing: finding a flow in full-speed gunplay. Movement is constant. Cover is irrelevant. Gore is gratuitous. Survival is a perpetual parkour of air dashing, double jumping, and wall-running, all while rotating through different flavors of carnage as each weapon’s dwindling ammo count allows.

Lo Wang’s arsenal ranges from standards like a semi-auto handgun to more unconventional implements like a shuriken-shooting crossbow. The shotgun, in particular, has a bassy punch that made mulching yokai fodder reliably satisfying. A quick-recharging chi blast knocks back enemies, and a retractable grappling offers an escape from the yokai mosh pit when you need space.

RECOMMENDED VIDEOS FOR YOU…
CLOSE
0 seconds of 30 secondsVolume 0%

This video will resume in 5 seconds

The rhythm’s helped by the game of resource management that’s running alongside the high-speed shooting. Ammo and health pickups are scattered around the combat areas, but enemies themselves are the most reliable refill options. Right-click melee attacks from Lo Wang’s katana generate ammo on hits and kills, while a refilling finisher meter enables executions for a health refill and a bonus effect unique to each enemy type. Lots of notes taken from 2016’s Doom here, and it’s just as grisly: the meaty gob factor is so high that it’s almost exhausting.

Those finishers provide an extra strategic layer: the most basic enemies will grant quick bonuses like temporary increases to maximum health, or a freeze grenade in the form of an icy slab of yokai brain matter. Larger, tougher enemies will instead provide a  “gore tool”: a temporary, high-damage weapon refashioned from a gruesome piece of the yokai’s corpse, like a hammer made from an oni’s meaty lower spine section.

It produces some enjoyable tension between competing impulses—while carving through waves of yokai, I’d spare a handful of low-tier demons to harvest for ammo or finisher bonuses as necessary. Of course, that meant there were more bodies around to trip up my combat acrobatics. It’s a fun balance to find, while it lasts.

As the hours progress, the momentum crumbles. Character and weapon upgrades eventually make HP and ammo drops a reliable constant, flattening the rhythm of in-combat decision-making. The single finisher animation for each enemy type means the gruesome novelty is short-lived; it’s not long before pushing the execution button feels like slamming the brakes. Each fight started testing my patience, even with the variety provided by platforming sequences that break up the march of combat arenas. Shadow Warrior 3 doesn’t have any better ideas for ramping up difficulty beyond throwing out ever higher numbers of its beefy demons, and the addition of two clunky boss fights doesn’t help. By the end of the game, every combat encounter is a bloated slog of bullet sponge enemies that drags on for ten minutes or more.

Of course, by this point, Lo Wang has already spent hours making the experience as unbearable as possible. From first cutscene to end credits, any small success is punished by having to hear Lo Wang’s god-awful banter, multiple times a minute. In seven hours, I heard Lo Wang yell hashtags hundreds of times. Lo Wang thinks the yokai are ugly. Lo Wang thinks you should clip that last headshot. Every fight won carries a danger of triggering Wang-based innuendo. Every kill is a chance to hear Lo Wang sing “Another One Bites the Dust,” except he says douchebag in it. Any swing of the katana means risking one of his three variations on the same prolonged mock infomercial about how it slices, dices, and makes julienne fries for four easy payments of $19.99.

He’s a caricature, a cheap punchline—one that’s been dulled down by a reboot since his first incarnation in the original 1997 Shadow Warrior, but still unavoidably a Western imagining of a funny Asian man as an excuse for dick jokes and a silly accent.

At the very least, for the first time in 25 years, the accent isn’t being performed by a white man in vocal yellowface. I don’t know how much of a victory that is, because the rest of the game doesn’t make it easy to give any credit. The soundtrack is a Frankenstein’s monster of East Asian musical stereotypes. Yes, that one Orientalist kung fu fighting riff (you know the one) is sampled. Yes, each combat encounter ends with a goofy-ass gong hit.

Meanwhile, Shadow Warrior 3’s idea of Japan is an unbroken sea of pagodas and Buddha statues, nestled in a landscape of mountain pillars that, to my untrained eye, seems inspired by photography of a distinctly Chinese karst range. It feels like just as much of an exaggerated parody as the soundtrack, or Lo Wang himself. I wouldn’t expect true-to-life accuracy from any game, let alone one with double jumps. But it shouldn’t leave me wondering, again, whether someone even thought to involve any of the real people from the real places being reduced to a hollow fantasyland.

I don’t think the game cares. I think it’s content with a Polish studio’s homogeneous, nonspecific idea of what “Asian” looks like. I think it’s comfortable knowing plenty of players will, even in the wake of a global rise in anti-Asian xenophobia, enjoy it without discomfort. After all, Lo Wang is the hero here. Isn’t that a compliment?

In one cutscene, the camera pulls back to reveal Lo Wang’s censored groin. Then he farts.

Shadow Warrior 3 is best experienced with dialog volume set to zero and subtitles turned off. It isn’t malicious. It’s tasteless. It’s embarrassing, because it expects that you’re the kind of person who’d enjoy it. Just play Doom 2016 instead.

Shadow Warrior 3 buries a fun shooter so deep in muck that it’s not worth dirtying your hands.

Lincoln spent his formative years in World of Warcraft, and hopes to someday recover from the experience. Having earned a Creative Writing degree by convincing professors to accept his papers about Dwarf Fortress, he leverages that expertise in his most important work: judging a video game’s lore purely on the quality of its proper nouns. With writing at Waypoint and Fanbyte, Lincoln started freelancing for PC Gamer in Fall of 2021, and will take any excuse to insist that games are storytelling toolkits—whether we’re shaping those stories for ourselves, or sharing them with others. Or to gush about Monster Hunter.